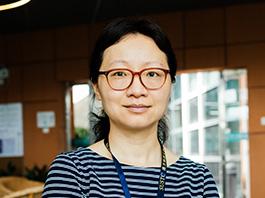 I began my study of Arabic in 1996 when I matriculated at Peking University.  I spent my junior year abroad in Syria; the beauty and hospitality of Bilād al-Shām really sparked my interest in Arabic language and culture.  After obtaining my master’s degree in 2003, I went to the United States to pursue a doctoral degree in classical Arabic Literature.  Due to my interest in learning languages which could deepen my understanding of Arabic and Arabic-Islamic culture as a whole, I studied sixteen other languages including Persian, Hebrew and Turkish.

My main research interest lies in the concept of adab and its manifestations in pre-modern Arabic prose.  I am particularly interested in the phenomenon called prosimetrum  Arabicprose.  I am particularly interested in the phenomenon called prosimetrum (prose-cum-verse), and how such a literary device interacts with framing, repetition and digression in creating the temporal and focal complexity in Arabic prose works.  My doctoral dissertation focuses on al-Hamadhānī’s (d. 398/1008) Maqāmāt, which is a collection of short picaresque narratives.  I have analyzed its prosimetric style and storytelling techniques by drawing analogues from the classical Chinese, Sanskrit, and Greek literary traditions.  I am currently revising the manuscript which will be submitted to the “Edinburgh Studies of Classical Arabic Literature.”

Other areas of my research interests include: One Thousand and One Nights, pre-Islamic qasīda poems, Sufi poetry, and last but not least, Quranic imagery.  My rhymed Chinese translation of al-Hamadhānī’s   Maqāmāt will be published by the Commercial Press in 2019.  Besides publishing articles and reviews on traditional journals like the Journal of American Oriental Studies, I write columns for China.org.cn (in Arabic) and ThePaper.cn (in Chinese) on various topics of Arabic language, literature and culture. I took up the position of research assistant professor at SUSTech in May 2018.  I offer two courses in fall 2018: “Writing and Communication Skills,” and “An Introduction to One Thousand and One Nights.”  I am teaching Arabic 101 in Spring 2019, which will be the very first Arabic course offered in the universities in Shenzhen, China .