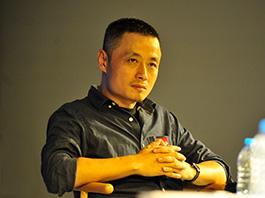 The curator of China pavilion at the 2010 Venice Architectural Biennale, Tang Keyang is a professor atSouthern University of Science and Technology (SUSTech), Shenzhen, China. In the past decade, he hasorganized and initiated numerous design and research projects in architecture and art. He curated anumber of major Chinese and international exhibitions, such as Glories of Chinese Writing at the PalaceMuseum (2010), and Chinese Gardens for Living at Saxony's Pillnitz Castle in collaboration with DresdenState Art Collection (2008). As a specialist in museum architecture and design, he is on the reviewingcommittee of renowned museums including Guangzhou Museum of Art and Shanghai Museum of Art inPudong. Professor Tang was also the coordinator and chief consultant for the recent internationalcompetition for the architecture design of National Art Museum of China.

Professor Tang's academic and literary works have been published in Chinese, English and several European languages, such as From Ruined Gardens to Yan Yuan (the Garden campus of Peking University),The Romance of Changan, The Last Days of Loyang: Ashes of A City, Larbre and La Nuit (in French andltalian), Ten Lectures on Chinese Museums, Delirious New York (his translation), The History of ModernChinese Architecture (his contribution. The winner of a National Publication Prize).

As a fruitful and influential writer, designer and scholar, Professor Tang is recognized by the Peacock Plan award of Shenzhen and the New Century Talent program of the Ministry of Education. In addition,Professor Tang was selected as Person of the Year" of Southern People Weekly in 2017; he wasnominated as Artist of the Year for Asian Contemporary Art Week in 2009 in New York. In 2006 Professor Tang was selected by Asia Society's Asian Youth Leadership program and attended its Summit ofthe 21st Century in Seoul, Korea.

Professor Tang's practices are committed to making a unique blend of art and architectural designs that is multidisciplinary by itsmethodology and visionary by its goal. He creates the Lab of Space and Media (InterLab) at SUSTech to explore the interaction ofarchitecture, art and science, adopting an interdisciplinary approach. "Space" alludes to the built environments of various scalefrom city to designed landscape, from architecture to interior installations. "Media”corresponds to a variety of artistic, literaryand technological means that endow meaning and intelligence to the environment. The conversations between“space" and"media”often lead to unprecedented "products”and a wide range of technological innovations, which makes design an activecomponent of the humanity.